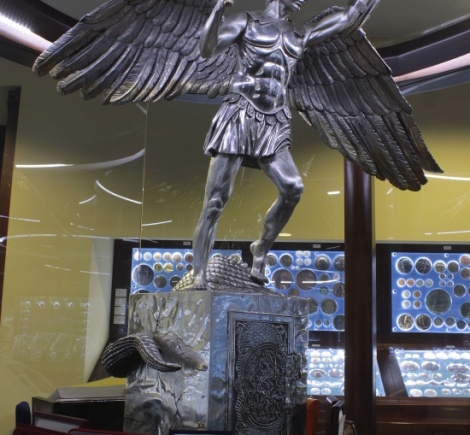 Back to the past.

We move back in time to the fifth century. To the cave of Monte Sant’Angelo on the hills of Gargano in southern Italy get crowds of pilgrims. The chronicles tell about numerous miraculous events associated with the revelations of St. Michael the Archangel. One of them  happened in 1656. At this time in Italy a lot of people suffered from the plague. The local bishop prayed to St. Michael for intercession and help. During fervent prayers in the Bishop's Palace Michael the Archangel reveled to him, recommending to bless the stones in a cave on Monte Sant'Angelo, and engrave a cross and MA initials (Michael the Archangel). Whoever had and honoured such a stone was protected from the deseases.

The cave in Sant'Angelo was visited by Polish king Zygmunt Stary as well as Father Pio da Pietralcina, John Paul II, and most recently Mr Mariusz Drapikowski amber artist from Gdańsk. During the conversation with priests Michalits, who are the guardians of the cave, Mr Drapikowski showed his works. They ordered a sculpture in his workshop and gave  him a large rock from pilgrims path. This stone was cut into slices, and one of them was delivered to our museum, along with the sculpture of Michael the Archangel, which is the third copy of this work in the world. In place of the words "Who (is) like God" on the shield, in the left hand of the Archangel, there are the outlines of our Queen of  Poland and the words  Under your protection. The inscription "Who is like God" was transferred to the sword lifted high above the head of Michael the Archangel. His figure is standing on a cube - symbolizing the earth, from which the dragon - a symbol of satan is trying to get out. On the front wall a low relief shows a scene from the Psalter of 1540 from the Winchester Cathedral:  open jaws of a beast devour people, the door is sealed, on its guard stands Archangel Michael himself.

The top and two side walls of the cube are disrupted by the tail of the beast which is trying to get out. The sculpture is made of silver, measures 110 centimeters and is a true work of art.

The sculpture realization method is a deep relief. This method was used in the Renaissance and later forgotten. We are absolutely sure that only Mr. Mariusz Drapikowski is able to use this method to create even natural sized figures made of silver . We invite you to see this unique work of art with relic from the cave of Monte Sant'Angelo with cross and initials of Michael Archangel on it.