This catalogue contains information on coins, countermarks, recast coins and substitute coins, designs which came into being during Pope John Paul II’s pontificate but were not realized then, as well as commemorative coins. The catalogue is devoted to, I am almost certain, the most extensive numismatic collection revolving around the subject "John Paul II" in the world. 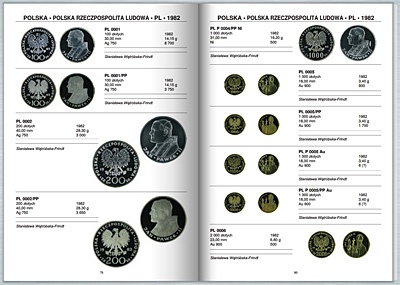 The present publication is structured in such a way that it will be possible to supplement the catalogue with new information as soon as new coins appear without the necessity to change the numbers attached to particular pieces in the following editions. I do hope that new editions of the catalogue will be published, since even today it is obvious that it would be impossible to include in the present edition all newly issued coins devoted to John Paul II.

I have decided, while attaching numbers to particular pieces, to catalogue each country of emission separately. Also the outline of the catalogue, different from standard numismatic catalogues, which arranges coins according to the year of emission and face value, has been purposefully designed in order to facilitate supplementing the publication with information on newly emitted coins by putting new entries under particular countries, which will not affect the general systematics.